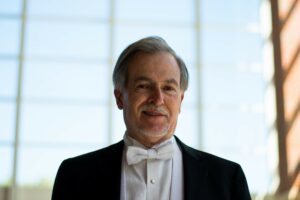 Randall Stroope is an American conductor, composer and university professor. In the last two years, he has had conducting engagements in Salzburg, Dublin, Vienna, Rome, Barcelona, Prague, Singapore, Hong Kong, Cambridge, and St. John (Canada). Randall has also conducted music for mass at the Vatican every year since 2009. He has conducted 36 times at Carnegie Hall, and 16 times at Chicago Orchestra Hall, among other American venues.   Randall conducted his 47th all-state choir this year.

As a composer, Randall has published 180 musical works (instrumental, solo voice, and choral).  One of his works was performed by the London Symphony on their 2015 holiday series.

Dr. Stroope is the Director of Choral and Vocal Studies at Oklahoma State University in Stillwater, Oklahoma, where he is a Regents Professor, Endowed Chair, and Distinguished Researcher.  He conducts the OSU Concert Chorale, Chamber Choir,   and teaches graduate courses in conducting and literature.

Randall completed a Master of Music (Voice Performance) degree at the University of Colorado Boulder, and Doctor of Musical Arts (Choral Conducting) degree at Arizona State University.  He did post graduate work with Margaret Hillis, Chorus Master of the Chicago Symphony.